Sils again get the better of Leamington

SILHIILIANS produced a rousing second-half comeback to again prove to be Leamington’s nemesis.

Leam had recovered from falling 8-0 behind to lead 19-8 in their Midlands Two West (South) contest at Moorefields, only for Sils to secure a 25-19 win with three late tries.

After the visitors had opened the scoring with a try and penalty, Leamington hit back with some thrilling attacking play.

Connor Chamberlain and Ian Cameron teased the tested the Sils defence to earn a lineout and Tom Lane secured possession before the ball was spun across the pitch for full-back Toby Bruce to force his way over. Sam Nunn slotted the conversion. 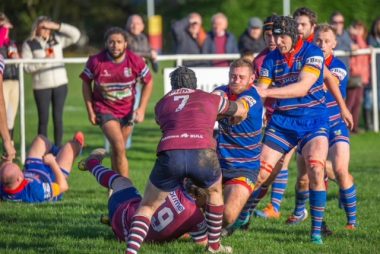 The hosts started the second half in dazzling form with two tries.

Bruce raced in for his second score after Chamberlain and Cameron again split the defence and, soon after, Gareth Shuttleworth collected Nunn’s clever kick to sprint under the posts. Nunn duly converted.

But a yellow card for Leam allowed Sils an opportunity to hit back and grab three tries.

Old Leamingtonians were given a walkover after opponents Stoke Old Boys were unable to field a team at The Crofts.