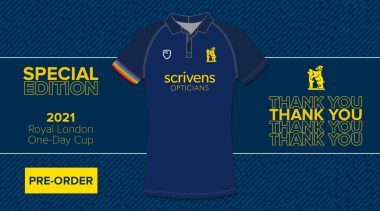 THE DONATIONS of Warwickshire County Cricket Club members have been recognised with a one-off playing shirt set to be worn in next season’s Royal London One-Day Cup.

With this year’s event cancelled due to the coronavirus pandemic, Warwickshire have made the move to reward the dedication of their fans with a shirt containing the name of each member who donated their annual subscription for 2020 to the club.

The shirt will be produced and designed by PlayerLayer – who also work with Football League side Forest Green Rovers FC – and will contain no less than 2,102 member names, with Scrivens Opticians acting as the sponsor.

In another show of gratitude by the club, the navy shirt will feature a rainbow band on the right sleeve in recognition of the ‘Rainbows for NHS’ campaign.

The special-edition shirt, priced at £45 for adults and £38 for children, can be pre-ordered from Store ’94, with deliveries expected to roll out early in 2021.

Warwickshire Members will also be able to redeem a promo email for ten percent discount on all shirts – including the special edition strip.

Alex Perkins, who acts as Warwickshire CCC’s head of commercial, reiterated the gratitude felt by the club from loyal fans and members.

“Everyone at the Club is incredibly grateful to all of our members for their generosity and supportive messages during a difficult time for all, and we were so thankful that so many chose to leave their annual subscription with the club,” he said.

“As part of this, we wanted to create an innovative and rewarding package to say thanks to our donating members.

“The shirt is just one part of this and we’ve worked very closely with PlayerLayer to ensure that we can incorporate all 2,102 names, whilst also creating a great looking shirt. We’re thrilled to reveal the design today and hope that our members and supporters like it.”