Trio of braces as Valley show their bite in season opener 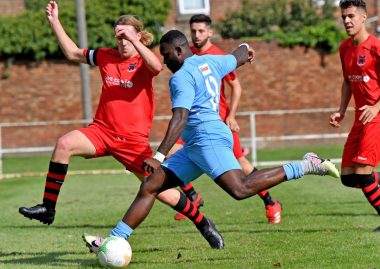 Just the one change was made to the side which went down 2-0 to Worcester City four days previously, with Keenah Rosser replacing Justin Marsden in the backline.A treble of braces for Liam Francis, Dylan Parker and Danico Johnson ensured the perfect start to the 2020/21 campaign, with five of Rugby’s six in their 6-0 rout arriving in the opening half of play.

Valley only needed three minutes to get themselves on the scoresheet at Sir Halley Stewart Field when Francis thumped home the opening goal of the season from Johnson’s corner.

It was a lead that was doubled just four minutes later, this time Parker getting in on the act when finishing expertly from Charlie Evans’ set-up.

Kurtis Revan threatened to make it three for Carl Adams’ side when forcing a deflected effort goalwards, only for Pinchbeck’s Ben Martin to tip the ball around the post. 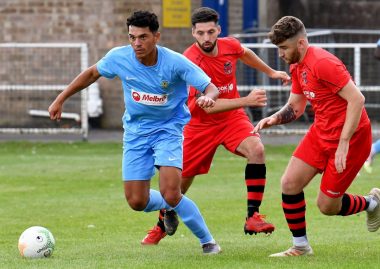 Kurtis Revan looks up for options. Picture by Martin Pulley.

Unexpectedly, it was Francis who was the architect and scorer with a powerful run upfield that resulted in a fine finish after a one-two with Parker.But the next goal did arrive in the 23rd minute, at which point it was effectively already game over.

Two quickfire goals from Johnson just before the break, falling in the 35th and 38th minute, then ensured a more laidback second period was in store for the visitors.

The 25-year-old’s first, a fine shot that zipped into the corner after touching the ball out of his feet, was matched – if not bettered- by his second moments later, when working a yard of space before ploughing a strike into the roof of the net.

And while Pinchbeck improved after the break to offer threats to Sam Lomax’s goal from Mario Neves and substitute Kye Dawes, there was never any real chance of Rugby’s stronghold being weakened. 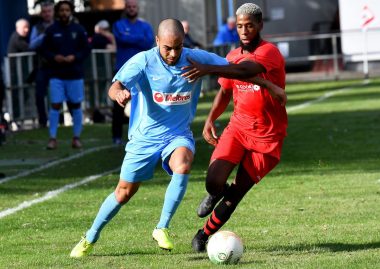 The latter did make amends for his earlier miss by grabbing his second of the game, meeting Lee Thomas’ centre to punish a defensive mistake by Daniel Worthington.Instead the key chances continued to fall for Town, who should have had even more to show for their efforts – had Evans and Parker done better with golden openings.

Perhaps the only point for improvement will lie with young forward Lewis Padmore – Rugby’s academy product – who showed great desire to try and score his first for the club but was unable to put away two late chances.

While dominant Valley could not have done much more on the opening day of the season, their win was not enough to send them top, with Loughborough University also winning by the same scoreline against Peterborough Northern Star and Shepshed Dynamo thrashing Sleaford Town 8-0.

A home fixture with Cogenhoe United now lays in wait for Rugby on Tuesday night (7.45pm), with a limited number of 300 tickets available for the game on the gate.