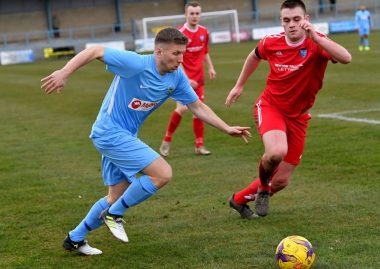 RETURNING hitman David Kolodysnki says he has all eyes on guiding Rugby Town to a United Counties League Premier Division promotion after moving back to Butlin Road.

The 31-year-old fan favourite, Valley’s all-time top scorer with 224 goals in a record 411 appearances, will begin a fifth term with his hometown club having being snapped up from Midland League Premier Division side Gresley Rovers.

It gives a real boost to a Rugby side that is already proficient in attack – ranking joint third in the league goalscoring ranks with 29 strikes to date – with Kolodynski’s latest spell set to make amends for his fourth term with the club that was cut short back in March.

The veteran forward was limited to a single 20-minute cameo against Boston Town prior to the first national lockdown that brought an early close to the 2019/20 campaign.

And for Kolodynski, his sights are fully set on making up for lost time.

“It’s great to be coming home. I’m really excited to have this opportunity to come in and contribute to what will hopefully be a promotion season,” he said.

“The Butlin Road pitch is an excellent one to play on and my boys love coming to watch games at the stadium, and I’m looking forward to experiencing the United Counties League too – as it’s pretty much a new one for me.”

Along with the highs, Town’s record-breaking forward has been through the mill with the club as far as the lows are concerned – having suffered two relegations in the 2009/10 and 2016/17 seasons, in addition to back-to-back play-off heartbreaks under Dave Stringer in 2012/13 and 2013/14.

With the club continuing their upward momentum from recent campaigns this term, sitting in sixth place with a six-point deficit to chase on leaders Anstey Nomads, the target of a first promotion since the 2003/04 season is very much in sight.

“I’m not sure there are any records left to break anyway to be honest, but having been part of two relegations in my times here, I really want to be part of a promotion too and it would mean a lot to me to get this club back up a level at least,” Kolodynski added.

“It’s frustrating that we can’t play at the moment, but I’m still training by myself at least twice a week so that I can be as fit as possible come the restart.”

With Town still out of action due to the current lockdown, Valley fans will hope to be back in attendance to see their hometown hero return in the first game back away to Peterborough Northern Star on Saturday, December 5 – before Kolodynski’s grand return to Butlin Road follows a week later against Loughborough University on December 12.

Wasps’ slow starts will be stamped out – Mansfield