Nathan Buck’s interventions either side of the interval helped Northamptonshire to a 38-run win over Birmingham Bears and gave them a third straight win in the Vitality Blast to extend their lead at the top of the Central group. 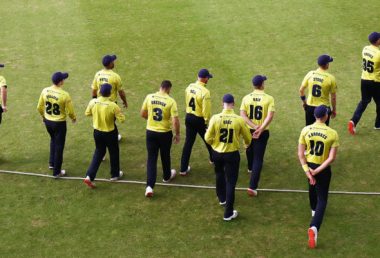 Buck swung 16 in 8 balls from the final 10 deliveries of the Northamptonshire innings to lift them to 158 for 7 having been sent in, before his double-wicket maiden in the fourth over of the chase rocked the Bears who never recovered and were bowled out for just 120 in the final over.

That Northamptonshire would win so handsomely did not seem likely when they were 135 for 7 in the 19th over. But Buck pulled Henry Brookes over midwicket for six and steered Olly Stone wide of third man for four.

He then removed both openers with slower balls as Ian Bell and Ed Pollock swung to Ben Sanderson on the edge of the ring. And when Graeme White bowled Adam Hose, with a beauty that turned just enough, and Will Rhodes reverse sweeping, the Bears were out of the chase at 38 for 5 after 8.1 overs.

Buck’s late runs grabbed the momentum at the halfway stage after Northamptonshire had drifted badly having made 66 for 2 in the powerplay. But only 57 runs came in the next 11 overs.

They were dragged back by left-arm chinaman Jake Lintott, 27, who began his career in the Somerset age-groups but here was only playing his sixth professional match. He took 2 for 18 from his four overs, the best figures of his short career.

Jeetan Patel’s off-spin was also typically miserly as he took 2 for 27. Patel removed Paul Stirling for 14 but he and Richard Levi, who made 35 in 28 balls, helped Northamptonshire to a promising start.

Levi struck Stone, back on his old home ground, over long on and cover for two sixes in Stone’s first over. Tim Bresnan was then pulled over midwicket as his first over was taken for 17 before Levi backed away to cut Brookes for six over third man. But he miscued another pull and was taken by Sam Hain running to his left from deep square in the final over of the powerplay.

The hosts then stalled. Josh Cobb lifted Lintott to deep cover for 1 and Alex Wakely pulled at Bresnan, missed and was bowled for 6.

Vasconcelos, deputising for Adam Rossington – rested after a blow to the hand on Sunday – began a rebuilding job and made 34 in 29 balls. He cut and swept Patel and then drove and cut Lintott for fours. But advancing at Lintott, was beaten by a flatter delivery and comfortably stumped by Vikai Kelley, an under-17 wicketkeeper from Staffordshire deputising for the ill Michael Burgess. Kelley also stumped Gareth Berg.

Vasconcelos’ departure began a slide but Buck’s cameo and a flat six over cover from White brought 23 runs from the final 11 balls of the innings to swing the match decisively Northamptonshire’s way.

Brakes duel with the Pilgrims in season curtain-raiser

Sky Blues denied at the death in final warm-up