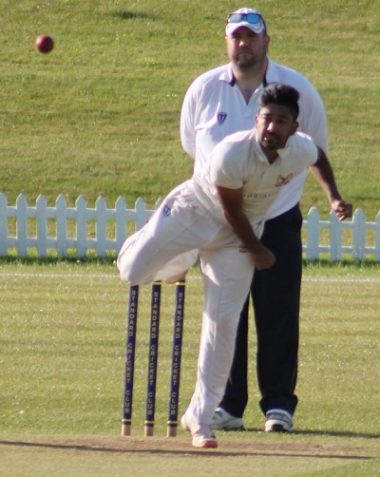 Ali Zaryab continued his impressive start to life in Leamington with a stunning five-for. Picture by Steve Johnson.

SKIPPER Harry Johnson hailed the match-winning impact of the returning Ali Zaryab in contributing a five-for in Kenilworth Wardens’ 11-run win at Himley.

Zaryab ended with 5-30 and Tommy Rex took 4-24 as the Wardens defended a miserly total of 128 to record a first win in five matches, pushing them up to third in Birmingham & District Premier Division Two.

With bottom side Pelsall visiting on Saturday, Johnson’s side will be confident of continuing their assault on the top-two.

“It was great to have Ali back bowling, it didn’t take long for him to get back into rhythm,” said Johnson. “He was a handful on a pitch offering turn and bounce. He’s an experienced cricketer and sets good fields making it very difficult for batters to score.

“Keith [Bell] scored a superb fifty to help hold our innings together when wickets were falling around him, and that was what allowed us to post something competitive.

“Tommy has been brilliant all season taking plenty of wickets with the new and old ball and he’s been equally valuable with the bat – scoring plenty of valuable runs down the order. His 25-run partnership with Ben Fitzgerald was crucial in the context of a low-scoring game.”

JONATHAN Wigley’s Leamington side were forced to settle for a losing draw at Knowle & Dorridge in their Premier Division One encounter.

With the hosts scoring 287-2 in their 55 overs, much in part to two centuries from Alex Phillips (139) and Hamza Shaikh (100), the visitors well and truly had their work cut out to issue a winning response.

But with a fifth-wicket stand of 54 runs between Oliver Currill (50) and Wigley (58) as good as it got for Leamington, it always looked a step too far against a stubborn Knowle & Dorridge bowling line-up.

“Leamington played it really well, so we were never really able to go all out for the win until the last few overs,” he said.

“They kept going for it until we got Currill out with six overs to go, and in truth it would have been close to a miracle if we’d bowled them out then on such a good pitch.”

Ollie stars as Leamington put on their Sunday best

Wardens hold their nerve to edge another thriller