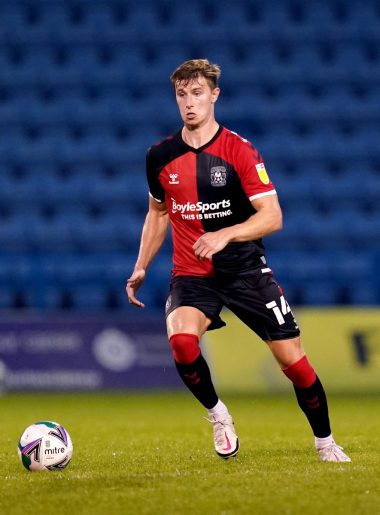 Maxime Biamou looked as though he had sent the Sky Blues through to the third round but Jordan Graham’s penalty deep in added time rescued the tie for the hosts.

Gillingham then went on to win the shootout with Michael Rose – who had conceded the earlier penalty – the only man to miss from the spot.

“There’s a lot of pleasing aspects but I’m disappointed to lose the shoot-out,” said Robins.

“Game understanding is clearly something the players have got to learn as that’s cost us.

“I thought we were brilliant. We were really good, but we weren’t ruthless enough. It’s a story of wasted chances.

“We had a couple of chances in the first half where we could have put the game to bed. Tiredness crept in, that caused a few mistakes, and gave them some impetus.

“I haven’t seen the penalty incident back but everybody’s telling me that it’s harsh. It’s really just hands on each other and their player has gone to the ground pretty easily.

“But that’s what happens if you give the referee a decision to make. It’s really disappointing as they never really threatened anything.”

Biamou rose the highest from Brandon Mason’s pin-point delivery just four minutes after coming on to give Coventry the lead.

Gillingham dramatically levelled in the fourth minute of stoppage time courtesy of Graham’s penalty following a foul on Vadaine Oliver.

But the game was marred by a serious injury to stand-in captain Stuart O’Keefe in the first half.

“We had to find a way to stay in the game,” said Gillingham manager Steve Evans. “They’ve missed a couple of good chances in the first half – they should have comfortably been in front.

“But we’ve done that before and you can pay the price for it.

“It’s a good result for us but the performance was scrappy at times.

“If you look at the whole game they’ll be disappointed and deservedly so but, if you break down the last 20 mins, we definitely deserved to score.

“The initial assessment is that it is a broken ankle for Stuart. It’s a naughty challenge – I thought that at the time and looking back at it on the screen it really is naughty.

“In all fairness that kid [Amadou Bakayoko] isn’t normally like that but it’s an horrendous challenge. I don’t look at the player – I look at the referee and why he didn’t take the appropriate action.”