FOOTBALL: A TALENTED young Leicester City XI side were stunned when three second half goals earned Leamington a comfortable pre-season victory at the Phillips 66 Community Stadium.

A one-goal deficit at half-time was quickly turned around by Paul Holleran’s men as Courtney Baker-Richardson, Rob Thompson-Brown, and Ahmed Obeng all found the back of the net – helped by a standout performance from substitute Kurtis Revan.

The midfielder won the corner which led to Leamington’s equalising goal before winning the penalty which put Leamington ahead.

It seemed the only thing the youngster didn’t do was score as Brakes prepared for their upcoming Vanarama National League North campaign with another pre-season win.

There were plenty of positives taken by Holleran after Friday night’s fixture as Connor Gudger in particular impressed. 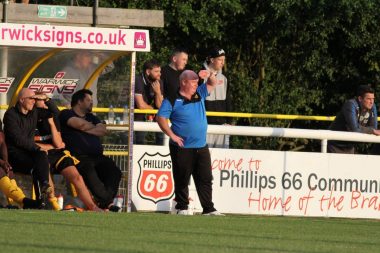 During the early parts of the game, Leicester City settled well into the game though struggled to break down the Leamington defence.

Leicester eventually took the lead on 28 minutes when Faiq Bolkiah’s shot was deflected into the bottom corner to hand the Foxes a one goal lead.

Bolkiah was almost on the score sheet again moments later after Richard Taundry’s wayward pass back towards his own keeper almost led to a second goal.

Baker-Richardson was penalised for climbing as he headed a cross from Gudger to the far post as the half ended 1-0 to the visitors.

A strong start to the second half for Leicester failed to add to their goal tally as Brakes remained tight in defence.

The introduction of Revan had a positive spin on Holleran’s side – and they were soon level when Baker-Richardson got onto the end of a corner to header homes Brakes’ first goal.

A neat piece of footwork from Revan then set-up Brakes’ second goal as he was tripped in the penalty area. Thompson-Brown made no mistake converting.

Further efforts from Revan and Bramley were either saved or shot wide as Leamington searched for a third goal.

And it came moments from time when Ahmed Obeng made space inside the box to hit one past Leicester’s keeper to earn Leamington a 3-1 victory.