DOES Warwickshire have the most expensive petrol in the UK?

Fuel prices at the Moto services at junction one of the M6 near Rugby rose above £2 per litre on Tuesday (June 7).

Regular unleaded at the services went up to 202.9p per litre, and regular diesel 204.9p.

The prices were spotted by ITV News Central’s Environment Correspondent Charlotte Cross, who tweeted: “Is this the most expensive fuel in the UK?

“It’s gone up a whopping 5p in two days, breaking the £2-a-litre barrier.

“I’ve certainly not seen any higher than this! Have you?” 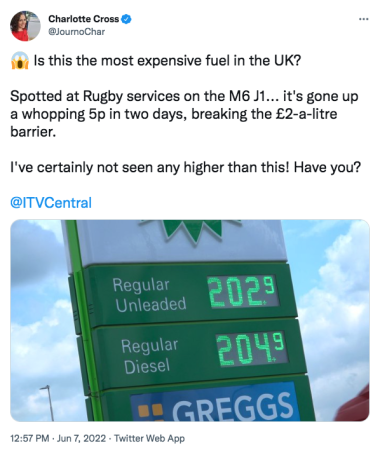 Prices at the pumps have been hitting record highs every few days in recent weeks.

The RAC called for ‘radical government intervention’, warning worse was still to come.

The motoring group’s fuel spokesperson Simon Williams said: “Average fuel prices rocketing to £2 a litre would mean a fill-up would rise to an unbelievable £110.

“More radical government intervention is urgently needed, whether that’s in the form of a further reduction in fuel duty or a VAT cut. As it is, drivers surely won’t be able to cope unless something is done to help.

“This is fast becoming a national crisis. We strongly urge the government to take drastic action to help soften the impact for drivers from these never-before-seen pump prices.”

Experts are warning petrol prices are likely to continue increasing as the supply of fuel slows down due to bottlenecks at refineries across the world, and soaring oil prices triggered by Russia’s invasion of Ukraine.

Last week, EU leaders agreed to cut 90 per cent of oil imports from Russia by the end of the year – sending oil prices up to more than $124 a barrel, its highest level in three months.

But prices at the pump are also being driven by a shortage of petrol and diesel, due to a huge surge in demand as driving returns to close to pre-pandemic levels.

Over the Platinum Jubilee weekend, drivers planned some 19.5million car trips, according to the RAC.

In March, the government cut fuel duty by 5p a litre. It said this would save a car driver on average £100 a year.

Green light given to much-needed affordable homes in Leamington